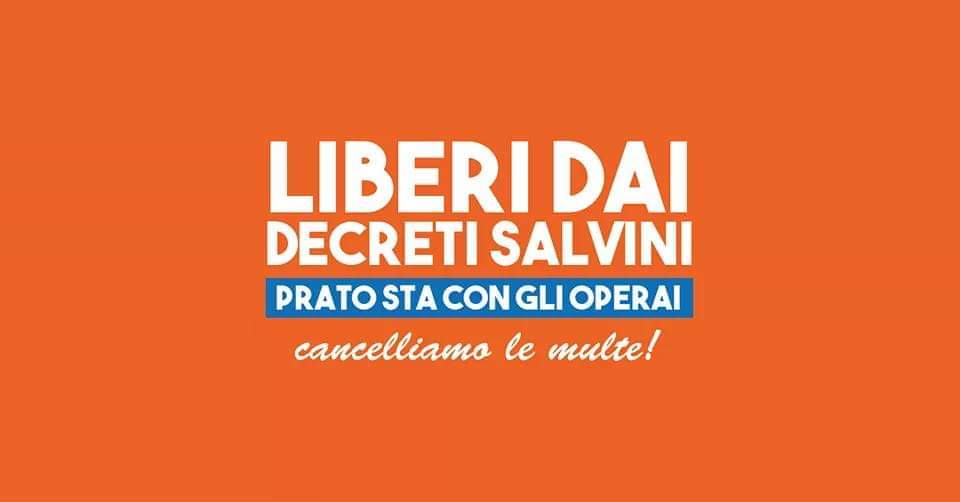 A few weeks ago in Prato, the second largest city of Tuscany, fines of 80’000€ had been imposed against 24 workers and labour right activists as the first implementation of the so called “Salvini Decree”.
The decrees are in fact named after the far-right-populist League’s secretary and contains strong repression measures against migrants, NGO’s operating in the Mediterranean Sea and also protest actions such as occupations or traffic blocks. For the latter, it establishes fines up to 4000 €.

The fines followed the 16 October 2019 protest of the Superlativa dyeing-factory workers. 18 workers haven’t been paid for the last 7 months and decided then to denounce the illegal condition they were imposed to work in: shifts up to 12 hours each, no days off, continued delays in payments.
During the strike they blocked the gates of the factory for some hours. In consequence of that, Police intervention caused some injuries and workers decided to block the street facing the factory. For these facts, 21 one of them, as well as 2 other activists, have received the sanctions established by the Salvini’s decree.

For the first time since the decrees have been issued, a Prefect has implemented the related measures against the protestors.
Indeed, the case has gained a national visibility. Moreover, it is useful to recall that in the last months a wide movement, the so-called Sardines, has mobilized thousands of people in every city claiming, among the issues, the Salvini’s decrees’ abolition. In fact, despite the new M5S-Democratic Party led-government took over, the decrees are still in effect.

Yesterday’s demonstration in Prato – “La Marcia per la Libertà” (Freedom’s March) – has been “a successful day for workers, for freedom, democracy and participation”, as Luca Toscano (Si-Cobas trade unionist) says, with a megaphone in his hands at the end of the march.

An unjustified and illegitimate ban has indeed been imposed by police commissioner and the prefect against the organizers of the “Prato Libera dai Decreti Salvini”. In fact, the image of Piazza del Comune crowded with workers, students and citizens of all kind claiming labour rights and the Salvini’s decrees abolition is riveting.

However, the city major doesn’t seem to share this opinion: in fact, even though Matteo Biffon’s election was supported by words like democracy and freedom – against the risks of far-right wing coalition win – his declarations were all but nothing different than those of the right-wing parties: he criticized the trade
union for “illegal and uncivil behavior” having violated the Police commissioner’s ban, therefore in a way supporting the legitimacy of Salvini’s decrees’ sanctions against the workers.

However, something has changed in Prato in the last weekend: many Democratic party activists criticized their major and showed solidarity with the workers.
A crowdfunding has also been launched in order to support the workers in case of rejection of the appeal against the fines, thus condemning those workers – whom, as stated above, aren’t receiving their salary for 7 months – to pay 4000€ each.