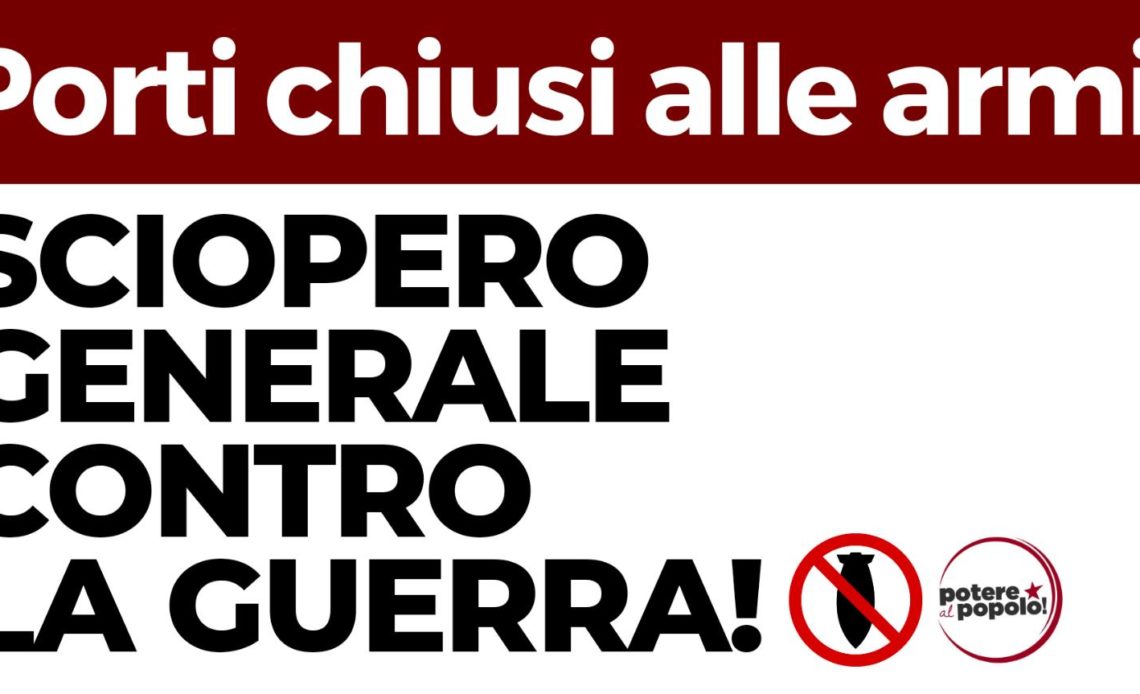 As I understand it, the ship will in the end no longer pass by the Genova port. I would like to ask you a few questions about it:

What kind of actions you did/had prepared?

We are organising a day of mobilisation for the 16th February, the day in which the Bahri Yanbu is supposed to arrive in Genoa. We would like to organize a demonstration for that day to say no to the trafficking of arms from Genoa, since we refuse to be part of the arms supply chain. We’ve called on different organisations, such as anti-war organisations, to join us in this action. We want the citizens of Genoa to participate in this struggle to stop the use of their port for these ends. We are not trying to take employment away from the city, it’s a matter of public security as well as an ethical question, that necessarily involves us all.

What organizations were involved? How did you get them to join?

Apart from anti-war organizations, left-wing parties, the Genoa antifa collective and citizens in general, we’ve been meeting with the local confederate body of the CGIL (“general Italian confederation of work”). Indeed among us dockers, about a half are also union reps for FILT CGIL. CGIL is willing to work on this and very concerned about the issue. We are asking the workers’ unions to call a city-wide strike: thanks to the previous actions against Bahri ship, Genoa has become a symbol of anti-war sentiment and now we want a city-wide strike against war, not only against this boat, but against war in general.

Someone could say that it will be difficult to draw support to this cause in a region that produces arms and in a country that in 2018 exported arms for 2.5 billion euros. That’s why some days ago we wrote a letter to the workers of the agency DELTA that works with Bahri. We realised that there are a lot of people who, more or less consciously, work somehow in the arms industry. In Genoa for example Leonardo and Fincantieri are involved in this business, which means that a lot of honest and hard-working workers abet it, too. Since it’s a very complicated issue, we hope that focusing on the port would help raising awareness and support in all the other fields, too.

I understand there have previously been actions against the Bahri Yanbu in Genova, so it seems to me you have a history of such (effective) activism on this topic? Why do you not want the ship to arrive in the Genova Port?

It’s at least four years we have been talking about this, because almost every day at the quay it happened to us to witness ships being loaded with armoured vehicles, containers with explosives and so on. In the last year we have seen that the Bahri arms company was loading larger numbers of these equipments (serious cargos, armoured cars with mounted Howitzers, armoured personnel carriers, helicopters). In May we decided all together to block from loading on a Bahri some generators which were going to be used to power the drones that bomb Yemen. This decision was also driven by our consciences, since it is impossible to work calmly in the port if you are working to load ships used to fuel conflicts across the world. That’s why we decided to stop. By doing so we also managed to bring the attention of the media to this issue and we raised the awareness of other workers on this problem. In fact this should be a workers’ struggle since workers should know the work they do and they should have control over it. If workers decide to stand up for issues like this, they would stand up also for other topics which relate with their job and rights.

Is it also your understanding that the ship has diverted its course and wont’ arrive at Genova? What is your reaction to that?

We know that the Bahri has now arrived in Bilbao, differently from what we expected. In Bilbao the ship is loading “dangerous stock”, so maybe explosives. As soon as it will depart from Bilbao, we could understand when it will arrive in Genoa, it will depend only on the knots it will reach. In Genoa the ship is supposed to load rolling stock (jeep etc) and aluminium bars, so stock which could also stay in Genoa or could be loaded on any other ship. We wish the ship won’t pass by Genoa or at least it won’t load anything, but we will see. We will wait at least until Thursday, and tonight we will see if it leaves Bilbao and at what time.

And finally, I am fascinated that there is such an international reaction to the ship. Can you explain a bit about if you have communication with other ngo’s/groups/activists in the other countries?

During this year we have been working to connect to dockers of other ports, throughout all Europe. Bilbao port workers blocked Bahri just before it arrived to Genoa, last spring. Last week Bahri Yanbu was due to stop in Tilbury, UK, but it met the protests organised by people of the Campaign Against the Arms Trade, who also instructed law firm Leigh Day to write to the UK government questioning the legality of the ship’s presence in British waters. In the previous weeks, NGOs in Belgium had taken similar measures to try and block the ship from loading in Antwerp. Protests are now planned in France.

Obviously we are also connecting to dockers of other Italian ports, from Livorno to Sardinia, Naples, Trieste. Moreover, comrades from associations against war, Potere al Popolo and others are helping us enlargening this network.