Statement for the release of Nicoletta Dosio and all political prisoners 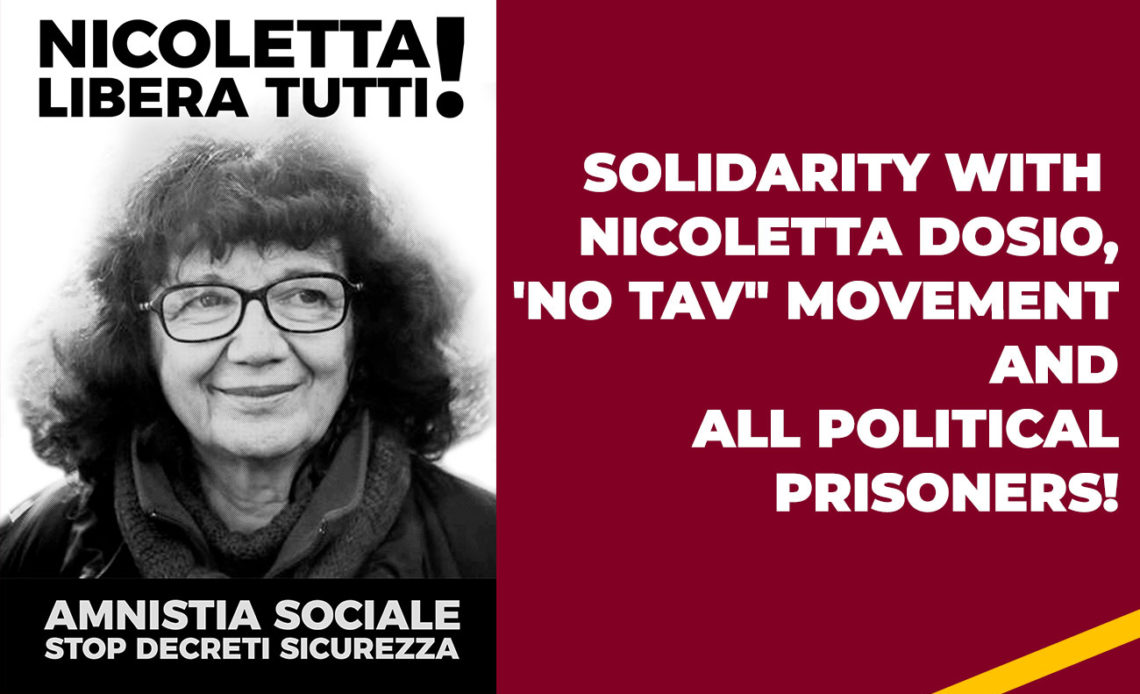 SOLIDARITY WITH NICOLETTA DOSIO, ‘NO TAV” MOVEMENT AND ALL POLITICAL PRISONERS!

On the night of the 30th December 2019 Nicoletta Dosio, aged 73 and member of Potere al Popolo’s national committee, was arrested and taken into custody. Along with 11 other activists she was charged with blocking a public highway, a crime punishable by 2 years imprisonment. The incident took place during a demonstration when activists keep the toll barriers of the motorway raised causing damages of roughly 700 euros to the company that owns the contract for managing Italy’s highways, a company (Autostrade per l’Italia – owned by billionaire Benetton family) that has made millions in ancillary works for the construction of the high-speed rail-line in Val Susa, Northern Italy. Nicoletta’s arrest is only the last in a series of persecutions suffered by the movement opposing the high-speed rail, and three other activists had already been imprisoned.

The “No TAV” movement (opposing the construction of the high-speed Lyon/Turin rail line) has suffered harsh repressive measures for many years. Activists have been put under house arrest or restricted from travelling, yet the movement refused to be crushed. The No TAV movement is the democratic struggle of a community for the ability to decide what happens in their local area, and against the use of public funds on large-scale works that cause significant destruction to the environment and bring no benefit to the majority of Italians. It is a struggle for a different model of development that serves the interests of the population and not the interests of the wealthy few. Criminalising protest has become all too common in Italy, not just in the case of the No TAV movement but also in the case of many workers’ struggles and environmental struggles. The recent immigration laws have destroyed the lives of many immigrants in the country and imposed heavy sanctions on acts of solidarity with migrants.

Nicoletta made the decision to refuse house arrest as a means of breaking the silence on the repression of struggles in Italy. Her courage has attracted solidarity from across the country, with demonstrations being organised in support in all major cities and even abroad. In Turin over the festive period activists brought pieces of coal to the Prefect’s office, to show that we know who the real bad guys are. And to show that we won’t accept the hypocrisy of our government that treats people who stand up for the rights of us all, for our future, as criminals, while our failing politicians and corrupt businessmen face no consequences. While profiteers benefit from public services provided on the cheap – just think of the case of the Genoa bridge, again under responsibility of Autostrade per l’Italia, which collapsed in August 2018 due to lack of maintenance killing 43 people – from extensive tax evasion that goes unpunished, from the destruction of our natural environments and our communities for the purposes of speculation, the Italian people are told to suffer in silence.

The following organisations demand the immediate release of Nicoletta, of all political prisoners and an amnesty for everyone who has been punished for protest. In a genuinely democratic society dissent would not be repressed in this way but rather confronted through open public debate.

Free all No TAV activists!