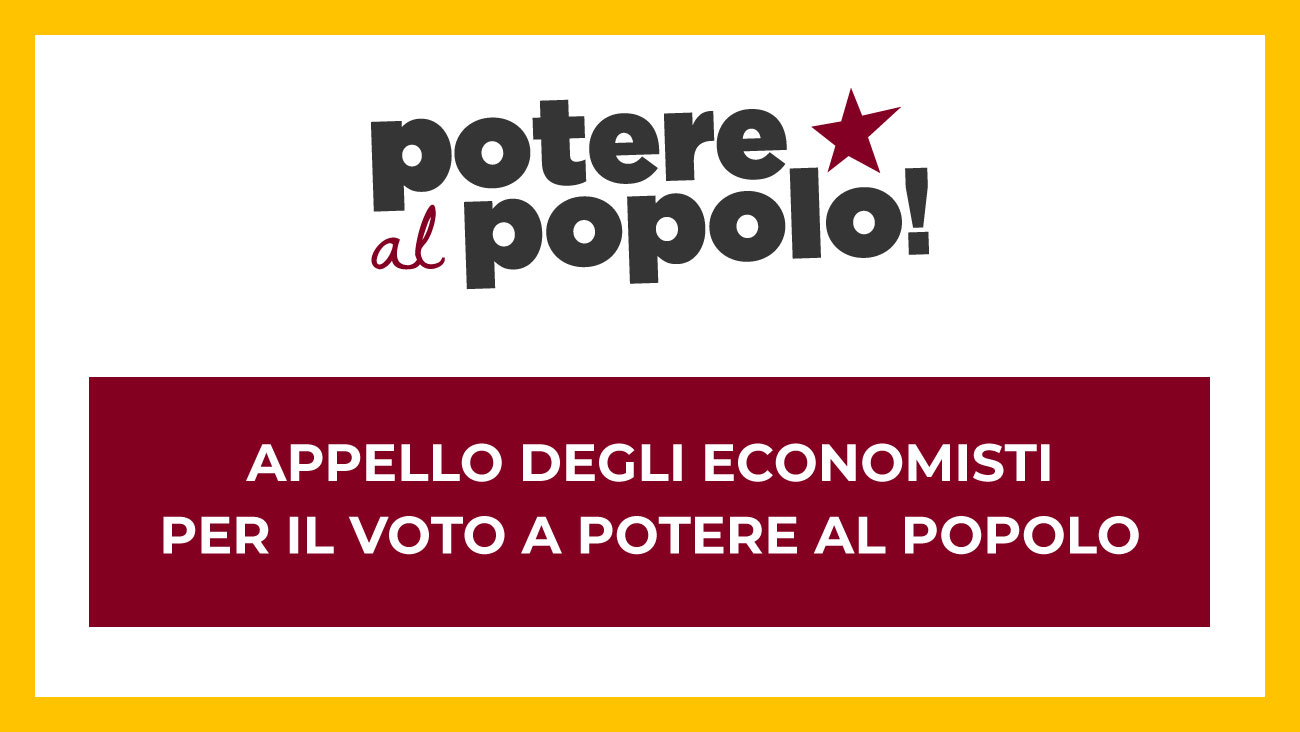 For an Economic Policy that gives Power to the People!

With this call we – Professors, researchers and students – recognise the economic programme of Potere al Popolo as the only one able to give an immediate answer to the priorities of the Italian economy and its population. Workers and grassroot classes can longer afford to pay for the harsh socio-economic crisis that broke out ten years ago. Most of all, we believe that Potere al Popolo is the only political force capable of giving a concrete answer to the 30-years long Italian decline, accompanied and fuelled by neoliberal economic policies against labour and the Welfare state. In this sense, we acknowledge 4 macro-priorities for the country: employment, tax reform, industrial policies and Welfare state.

First, the biggest economic and social tragedy in Italy is called unemployment. The unemployment rate stands dizzying levels (10.8%), all the more serious if we consider youth unemployment (32.3%); furthermore, data do not consider the many discouraged workers (3.2 billion) and the underemployed (740.000). In this sense, we acknowledge the failure and the economic irrationality of labour market flexibilization, put forward both in the years prior and after the crisis,  that has been doing nothing but normalize precarity in the labour market. Consequently, we acknowledge the validity of the proposal of Potere al Popolo to cancel Jobs Act, the ‘Fornero’ reform on employment and on social security and all the laws that deny the right to a stable job. Therefore, Potere al Popolo aims to launch the Programme for Employment, based on public employment for the requalification of Welfare, reduction of working time to 32 hours per week for equivalent wages, as well as over the entire lifecycle, bringing back the retirement age to the levels prior to the ‘Fornero’ reform. Furthermore, the Italian recovery ought to pass through the abolition of all the forms of free work and overexploitation, today accepted and promoted by forms such as the jobs on call, as well as the vast majority of intern and apprenticeship positions.

Second, an absolute priority is the re-establishment of the truly progressive nature of the Italian taxation system, with the reintroduction of new tax brackets as regards the personal income tax (IRPEF), accompanied by the reduction of the tax rate on lower income households. Moreover, there is an economic urge to introduce a property tax on high-wealth individuals, in a context in which the top 10% of the population owns more than the 55% of national wealth. Besides answering to constitutional principles (art. 53), such tax reform would allow expansionary effects through the demand channel, re-launching the propensity to consume out of labour income, depressed after 10 years of crisis. In the same direction is heading the proposal to cease the indiscriminate transfers and tax benefits to firms. Furthermore, an increase in the progressiveness of the system cannot help going through an increase of the tax base, seriously fighting against tax avoidance of big businesses, recovering hidden assets and rents. Only through these measures the Italian tax system will be able to carry out the functions of redistribution and counter-concentration of income and wealth provided for constitutional principles (art. 3).

With a decade-long stagnant productivity and investment far from recovery (especially in highly specialized sectors), Italy appears as the peripheral country in the European Union where keener is the need for a serious industrial policy, capable of putting an end to the mechanism of seeking competitiveness only through prices, at the expense of workers. In this sense, we advocate a massive plan of public investment, accompanied by the Programme for Employment, aimed to build up an inclusive productive structure, able to grant full employment, decent work conditions for everyone and that allows large-scale ecological transition. Potere al Popolo takes back the possibility of public economic planning and direct State intervention in the process of re-industrialization of the country, that has to involve the technological renovation, the restoration of the industrial sites, moving away from the speculative motive, and the environmental compliance of the production. Due to the market failures and to the ruinous policies that have promoted similar mechanisms (such as bonus, subsidies, and tax reliefs), Potere al Popolo proposes the nationalisation of the firms operating in the economic strategic sectors, together with a plan of public investments.

Such an industrial policy is all the more urgent in lagging regions, especially in the Mezzogiorno, where it is stronger the need of development as an answer to the blackmail between health and labour standards or between legality and illegal work, to which Southern workers and young people are mostly subjected, together with the migrant workers, exploited through illegal employment and new forms of slavery.

A Welfare State for everyone

Acknowledging the positive economic effects provided by an efficient Welfare state, we stress the need to increase social spending, financing it with the increased revenues obtainable throughout the tax reform and to cut drastically the military expenditure. In particular, we support the proposal made by Potere al Popolo about the abolition of the tickets on health services, in order to enhance the universalistic nature of the National Health System and to fight against its deviation towards a private management. Thus, we promote the removal of private agents from the business of the healthcare system, together with the standardization of the health service in the entire country, through a hiring plan and a re-financing programme directed mainly to the residents and the economy in the Mezzogiorno, which are currently penalised by fake meritocratic criteria which have fuelled an unequal system. We consider an increase of the share of the GDP devoted to the public education as necessary, abolishing all of the financing public contribution to the private education system and challenging the fundamental dynamics of the existing inequality in the education, which are related to the process of corporatisation and commodification of the education at all the degrees, from the school to the research world.

We are well conscious that the proposal here outlined cannot be compatible in any way with the absurd rules that govern the European Union of the treaties. Against that broken model, Potere al Popolo claims the implementation of macroeconomic policies for a concrete public intervention, inverting the current situation which does not allow any kinds of economic and industrial policies – which are as necessary as urgent – while it promotes indiscriminate cut of the social spending. We consider that only the proposition of the power relationships in favour of the workers and all the progressive forces, in Italy and in Europe too, could lead to a change in the European institutional establishment  such that the economic and social convergence among the member countries could be achieved. In case of necessity, we believe that a Plan B could be valid to encourage the unilateral measures of exit from the Economic and Monetary Union.

Within the Italian political landscape, the economic programme of Potere al Popolo is the only one able to give a concrete and plausible alternative to the absurd logic that has been ruling the country over the last years, by placing at the centre the interests of workers, students, unemployed and of all those impoverished by a crisis that they have unfairly paid so far.